Jargon & the Blockchain: “HODLers to the MOON”

Lying in bed wondering why Blockchain is so enigmatic? Perhaps it is because the libertarian culture of this new economy has repudiated the old guard. Post-Snowden, 2008 debacle and Equifax hack, every blockchain advocate is sleeping with his shotgun and thumb-drive under his pillow.

And God-bless these renegades. They have successfully eliminated layers of middleware and brokers by leveraging consensus to make transactions trust-less: Meaning no handshakes required.

(However, it is confusing to the uninitiated. A HARDFORK is used instead of software updates and versioning.  Blockchainers put keys in a WALLET instead of on a keychain where they belong.)

Regulators and main street are starting to demystify, rename and repatriate the blockchain. Blockchain token sales (ICOs) that drive capital formation are now treated as securities and token WHITEPAPERS are starting to be held to a standard of an offering memorandum.

Even the term ICO is in need of a remake after getting egg-on-its-face after a number of false starts. Swiss-based Tezos is a poster child for a mismanaged $232M ICO with class action law suits in the wings. Centra Floyd Mayweather endorsed $32M ICO founders used the funds raised to buy fast cars. 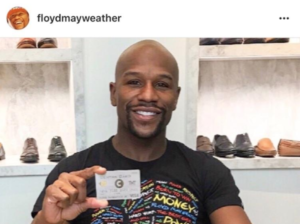 And fast cars are a trope of the industry. Look at the lingo of the blockchain boards.

“I’m holding on to my Satoshis, until I can buy a new Lamborghini Aventador for 75,000 Satoshis. Let’s not forget the true value of Bitcoin”

Blockchain slagsters that are asking their fellow goldbugs to “HODL” are suddenly called “HODLers”.

There is joy and elation as this HODLers community see their coins rise in value. A blockchain feeling called TO THE MOON: “Bitcoin to the moon.”

This is usually a result of the original HODLers of Bitcoin, called WHALES promoting the value of tokens and coins. When a WHALE pumps and dumps, the TO THE MOON feeling often hits terra firma really fast.

But the allure of the LAMBO (Lamborghini) is always there. It was for the CENTRA token founders …