I am focus on Cannabinoids. The technology to track, measure and sell CBD to a new marketplace. In the cloud. In store-in-a-store. Key to any new industry is to see beyond the existing (very one-dimensional) CBD market.

Yes, Vince and Eric are the main actors but just as important to the script are the minor posse of C-list and groupies. To round out the Entourage, we need Johnny “Drama” Chase, Vince’s personal chef, trainer and bodyguard; we need Salvatore “Turtle” Assante Vince’s feakless driver and assistant and, of course, Ari Gold, the Endeavour power-lunch agent.

Similarly, the hemp-based entourage need a cast of characters. THC and CBD seem to play the lead: these compounds sit center stage in all articles and studies; however, it takes more than headliners to make a hit show.

Back in 1998, two Israeli biochemists started to talk about the Entourage Effect of cannabinoids. Raphael Mechoulam and S. Ben-Shabat told the research community that compounds in cannabis supposedly work in concert: the whole plant is greater than the sum of the isolated parts.

We know that there are hundreds of chemical compounds in the hemp plant. These include cannabinoids (CBD, THCa, THCv, CBDa, CBG, CBN, and CBC) and terpenoids (Pinene – pine and Myrcene – earthy, musky, fruity), which give the plant the complex smells and flavours.

The human endo-cannabinoid system appears to be more likely to bind to cannabinoids when they act in concert. Cannabidiol (or CBD) is the principal actor that interplays with THC – reducing its psychoactive effect on the body. CBD additionally mitigates THC’s negative impact on memory.

However, the compounds Myrcene and Linalool contribute to the entourage effect, directing sedative and reduce anxiety effects.

THC has a strong binding affinity while CBD has no particular binding affinity. The benefits CBD and its cast of CBx characters are created through combinations and indirect effect.

The science of entourage formulation and its accretive effect on the human body is at an early stage. While we focus on CBD we need to start to develop a results-based methodology which provide proven formulas to the market. The new science of CBx components developed to target the body’s CB1 and CB2 receptors.

Just like our HBO show’s slugline: “His fame is their fortune,” CBD will open up a new science where all components will play active and important roles. 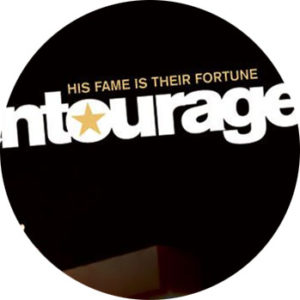